Good morning everyone, as you can see we are doing something a little different this morning.  This sermon series is called “On the Team” and its about everyone getting into the game and joining God’s team in serving the church.  But near the beginning of this series we wanted to make sure we showed that Spirit & Life was one team by doing a little pulpit swap.  So Mario is preaching to the English service this morning and y’all are stuck with me.

I remember when I played football in high school in the first two weeks when we had two-a-days and would go off for a week of training camp there would be this divide between offense and defense.  You spent so much time practicing offense with offense and defense with defense and coming together only to scrimmage that there were times where it felt like we were on separate teams.  We even had different color practice jerseys.  But then that first game would come.  And we’d all be standing in the locker room getting ready, we’d be waiting to run on the field and it clicked in we were one team with one objective and one common goal.

It was in playing, it was in getting in the game that the oneness of the team was felt the most.  When we were the most keenly aware of our common identity and our common task.  And I think that’s what it’s like in the church as well.  When we get in the game, when we serve, when we roll up our sleeves we see most clearly our common goal and our common task.  What that goal and what that task are are the subject of our Scripture text this morning.  For that we are going to turn to Matthew 4 but before we get there I want to set the context a little bit.

The first two chapters of Matthew’s Gospel are the Christmas story.  First we get Jesus’ family tree and then we have Joseph and Mary and a visit from an angel to tell Joseph what’s about to happen.  The baby is born and then we have the visit from the Magi.  The Magi warn Mary and Joseph that King Herod is going to come for them, so Mary and Joseph flee to Egypt.  After a couple years its safe for them to return home and they do.  Then Matthew chapter 3 begins with John the Baptist and his teaching and preaching by the Jordan.  Jesus comes to John for baptism and the Holy Spirit descends upon Jesus and God says this is my beloved son.  The start of Matthew chapter 4 is Jesus fasting in the wilderness being tempted and withstanding temptation.

I say all this because as we read our text this morning I want us to understand we are at the very start of Jesus’ ministry. To stretch my sports analogy, everything that has come up to now has been a sort of preseason.  A very important preseason, but preseason nonetheless. Jesus is right now about to get in the game, about to get his season of ministry underway.  And as Jesus kicks off his season he reveals what it is our common task and our common goal are.

With all that behind us, let’s read in Matthew 4 and see how Jesus kicks off his season.

When Jesus heard that John had been put in prison, he withdrew to Galilee. Leaving Nazareth, he went and lived in Capernaum, which was by the lake in the area of Zebulun and Naphtali— to fulfill what was said through the prophet Isaiah: “Land of Zebulun and land of Naphtali, the Way of the Sea, beyond the Jordan, Galilee of the Gentiles— the people living in darkness have seen a great light; on those living in the land of the shadow of death a light has dawned.” From that time on Jesus began to preach, “Repent, for the kingdom of heaven has come near.” As Jesus was walking beside the Sea of Galilee, he saw two brothers, Simon called Peter and his brother Andrew. They were casting a net into the lake, for they were fishermen. 19 “Come, follow me,” Jesus said, “and I will send you out to fish for people.” At once they left their nets and followed him. Going on from there, he saw two other brothers, James son of Zebedee and his brother John. They were in a boat with their father Zebedee, preparing their nets. Jesus called them, and immediately they left the boat and their father and followed him.

So first I want to start with our common goal because its what Jesus starts with.  I don’t know if you’ve seen it, but a few years ago there was a great TV show called Friday Night Lights.  The show was about a high school football team in Texas.  And the coach had a motto for his team, for his program, that was written in the locker room, on the field, in the offices, everywhere.  And he would say it to them over and over and would get them to repeat the last part.  And his motto was “Clear Eyes, Full Hearts, Can’t Lose.”  Most of the time the Coach would say the first two thirds, Clear Eyes, Full Hearts and then the team would shout back Can’t Lose.

Pretty much every football coach and team and program has some sort of motto.  Some sort of refrain.  Some saying that defines who they are as a team.  I can still quote some of the coachisms that my football coach would tell us over and over but our team motto was DAFCT.  Discipline, Accountability, Faith, Character, Team.  It was fifteen years ago I last played football and I can still remember it.  Such is the power of these team mottos.

In this first section Jesus gives his own team motto.  “Repent for the Kingdom of heaven has come near.”  Now in Matthew’s Gospel he writes it Kingdom of Heaven.  Matthew was writing to a primarily Jewish community that had an incredibly high reverence for the name of God such that they would rarely if ever write it down.  They rarely if ever would speak it.  If you wrote it down on a piece of parchment, you had to make sure that parchment never got dirty, was never put on the floor, wasn’t lost, etc.  And because things that had God written on them had to be treated with such care, you developed somewhat of a shorthand in order to protect the name of God.  So Matthew writes “Kingdom of Heaven” where other Gospel writers would write “Kingdom of God.”

As a way of living out this goal, as his first action in the start of his season, Jesus goes down to the Sea of Galilee. And there he notices some people. And this happens.

As Jesus was walking beside the Sea of Galilee, he saw two brothers, Simon called Peter and his brother Andrew. They were casting a net into the lake, for they were fishermen. 19 “Come, follow me,” Jesus said, “and I will send you out to fish for people.” At once they left their nets and followed him. Going on from there, he saw two other brothers, James son of Zebedee and his brother John. They were in a boat with their father Zebedee, preparing their nets. Jesus called them, and immediately they left the boat and their father and followed him.

After preaching all over about the incoming Kingdom of Heaven, the inbreaking Kingdom of God, announcing his motto and our goal he goes off in search of a team.  He wants teammates in this work.  So he comes upon two fisherman, Simon who will be renamed by Jesus Peter and his brother Andrew.  Put down your nets, Jesus says, follow me and I’ll send you to fish for people.  Jesus is inviting them to get into the game to get into the action.  He’s inviting them to be on his team working towards the common goal of witnessing to the Kingdom of God.

Then Jesus comes upon James and John who were with their father.  James and John would have learned to fish from their father.  Zebedee would have taught them to fish as they were growing up so that one day they could take over the family business from him.  And he would have taught them to fish by taking them fishing.  By having them cast the net with him.  I wonder if that’s why its so important to include the detail that their father was with them in this story.  Matthew is explicit in saying they left the boat and their father to follow Jesus. And I think part of what that’s about is signaling they are going to be taught by Jesus the way their father taught them to fish.  Jesus will teach them by having them be involved in the process.  They will learn by doing.  They will get an apprenticeship in witnessing to the Kingdom from Jesus.

It’s funny you know the Gospels don’t tell us Peter and Andrew and James and John were the only people Jesus spoke to that day. It doesn’t say he spoke with more people but I do wonder.  I wonder how long he walked up and down that seashore and how many people he called. Was it just these four?  Or were these the only four that said yes?  How many others might there have been, how many other fisherman that might not have been willing to put down the nets?  I know that there are times God has called me to something and I have kept the net firmly in my hand, unwilling to move.

So what about you? What about today?  Do you hear Jesus’ call to serve?  Are you ready to get into the game and on the team?  If so, I want you to take notice of two things. One is a full sheet of paper, its got the list of all of our ministry teams on it.  It’s got descriptions of what they do and what serving on that team would require of you.  And its got the pictures and contact info of the team leaders.  Take a look at that and think about and pray about what team you want to join.  How you want to serve.  How you want to get into the game.

And the next thing I want you to take notice of is the player card.  When you have figured out which team God is calling you to join, fill out that card. On the front there’s a space for your name, and on the back there’s an area for contact info and then what team you’d like to join.  The team lead will contact you this week and get you plugged in.

Jesus is calling you to get into the game, to follow him in active service.  Through following Jesus, through serving we work towards our common goal of witnessing to the Kingdom of God coming into our midst.  And we see that we are all on the same team together, called by Jesus and led by God.  So let’s get on the team and let’s get into the game.  Let us pray. 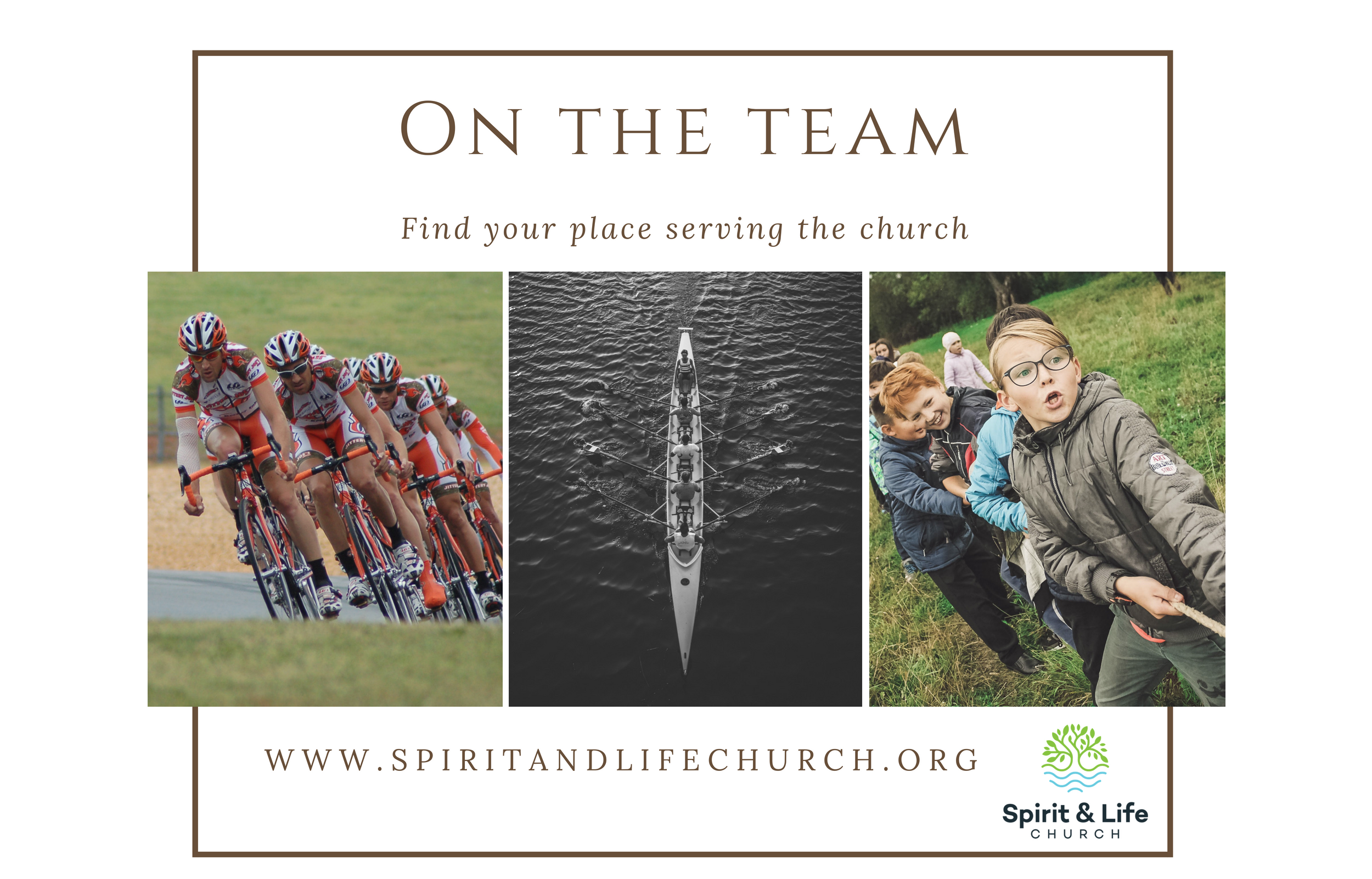 More in On the Team