The Fear That I Am Unloveable

Psalm 18 is very personal to me. I remember very distinctly when it became personal. I remember where I was living. I remember what table I was sitting at in my kitchen. I remember being 19 years old. I remember the month. And I remember hurting so much. It was in that pain that I remember stumbling onto this crying prayer in Psalm 18 and understanding (maybe) for the first time how God moves the heavens when me as his child is hurt and cries out. I still love the descriptive way I see my prayers being heard by God as told in Psalm 18:6-15.

But in my distress I cried out to the Lord; yes, I prayed to my God for help. He heard me from his sanctuary; my cry to him reached his ears.

Then the earth quaked and trembled. The foundations of the mountains shook; they quaked because of his anger. Smoke poured from his nostrils; fierce flames leaped from his mouth. Glowing coals blazed forth from him. He opened the heavens and came down; dark storm clouds were beneath his feet. Mounted on a mighty angelic being, he flew, soaring on the wings of the wind. He shrouded himself in darkness, veiling his approach with dark rain clouds. Thick clouds shielded the brightness around him and rained down hail and burning coals. The Lord thundered from heaven; the voice of the Most High resounded amid the hail and burning coals. He shot his arrows and scattered his enemies; great bolts of lightning flashed, and they were confused. Then at your command, O Lord, at the blast of your breath, the bottom of the sea could be seen, and the foundations of the earth were laid bare.

I love the dramatic visual of that. And the visual goes on and on for 50 verses of God hearing and responding to me because I cried out. That day this psalm became mine. And it still is.

I was crying out that day so many years ago because I was dumped by a guy. A guy I could not care a flip about a few months later. A guy who’s name I do remember but I don’t care enough to even see if he’s on Facebook now. He is a no one in my timeline yet at that time of my life being dumped by him pained me so. So much that I leaned into God to help me through the pain and was gifted this personal psalm of Psalm 18. A psalm that has held me together for the much greater pain that has shaped my life today.

It just dawned on me as I was sharing yet again why this psalm is so dear to me that perhaps I was not in pain back then because of the who who dumped me but because of my deep fear that I was unloveable. That is what was causing me to cry out and beg God to hear my prayers.

Turns out I am loveable.

I was dumped after this by other men. I did hurt greatly from some of these dumps. But it wasn’t like this one, the one whom I care to remember nothing about. But I do remember him because that is when this psalm became so dear to me and has held me together so many numerous times since. It must have been then—from the depths of my heartbroken prayers—that God heard and answered me. And I knew I was loveable.

You too are loveable. You too are worthy of love and belonging. You always have been. Worthiness is your birthright. 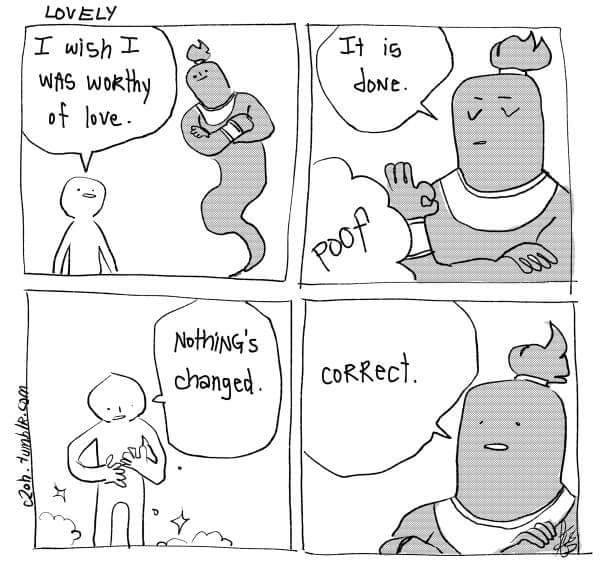 If you don’t believe that, I dare you to pour out your cries to God as to why and dare God to give you a personal psalm. Have your ears open. Be ready to feel the pain of the truth because this pain is your beginning.